Sports are fun and interesting! Whether playing, analyzing, or watching, sports have provided a needed distraction from the world around them. And, many fans who watch sports are naturally fans of a specific team or teams from a specific city. Naturally, most people in Washington are fans of teams from Seattle. Seattle has, had, or will have a team for each of the big four sports in North America: baseball, football, basketball, and hockey. The Mariners and Seahawks have been staples of Washington’s culture for years. The Seattle Sonics have remained popular for over 12 years since they’ve departed for Oklahoma City. Now, the Seattle Kraken are poised to make their entry into the NHL next fall. Each of the teams listed has very different outlooks for the future. Some are optimistic, some might be grim. As a first-time sportswriter, I’ve decided to forecast the futures of these teams. However, don’t treat these forecasts as fact; the future of a franchise in any sport can change with a single decision, be it for the better or worse. Marco Gonzales, current Seattle Mariners starting pitcher.
The Seattle Mariners are a team I’ve loved as a kid and still love today, but I’ve never gotten the chance to see them in the playoffs, nor has any current student at Archbishop Murphy. The last time the Mariners were in the playoffs was 2001, off of a record-tying 116 win season. Bad trades, lousy drafting, and poor free agent signings throughout the 2000s and 2010s made sure of that. Last year in 2019, the Seattle Mariners paid its farewell to two legends in Ichiro Suzuki and Felix Hernandez, the former retiring at age 45 and the latter being traded to Atlanta after severe regression. After a total blowup of the team in 2019, moving around nearly every piece in the old core, the Seattle Mariners have turned into a team gearing up for the future. The new face of the franchise is the 2020 American League Rookie of the Year Kyle Lewis, becoming the fourth Seattle Mariner to receive the honor, alongside Ichiro in 2001, closer Kazuhiro Sasaki in 2000, and Alvin Davis in 1984.

The Seattle Mariners have more prospects that can potentially add their name to this list as well in Jarred Kelenic, Julio Rodriguez, Emerson Hancock, and Logan Gilbert among others. Jarred Kelenic and Julio Rodriguez in particular are both top 5 prospects league-wide. The next few years might be interesting to watch, and might even be the time for the Mariners to make their first postseason appearance in 20 years. The Astros are dealing with George Springer leaving in free agency and Justin Verlander, their best pitcher, needing Tommy John surgery, keeping him out of the 2021 season. The Athletics have notable players like Liam Hendricks and Marcus Semien leaving in free agency. The Angels are still stuck in a disastrous contract with Albert Pujols and lack quality pitching.. Finally, the Rangers collapsed in 2020 with the second-worst record in the league. With the right moves and a top-5 farm system, the future may be bright for the Seattle Mariners. Russell Wilson, the Seahawks’ quarterback since 2012.
The Seahawks are a team that has seen much more success than the Mariners as of late, winning a Superbowl in 2014 and an NFC Championship in 2015. However, the Legion of Boom Seahawks is gone. Since 2016, the Seahawks’ results have been quite mixed, with the team failing to get past the divisional round in every season since their NFC Championship. With an incredibly disappointing wild card exit against a hobbled Rams squad, the Seahawks had to make decisions. The Seahawks started with signing Rams passing coordinator Shane Waldron, canning Brian Schottenheimer in the process. However, a much more urgent problem arose in the offseason. Russell WIlson was unhappy with the Seahawks offensive line. Since 2012, Russell Wilson has been the most sacked quarterback in the league. Trade rumors began to foment entering the free agency period. As of March 16, 2021, Russell Wilson has not been traded from the Seahawks, but the Seahawks have failed to sign any available offensive linemen, while seeing some other key pieces like Shaquill Griffin depart. The Seahawks will need to make changes and additions to the team soon, else risk seeing the face of the franchise demand a trade. We’ve already seen this with Deshaun Watson, so it’s not impossible that the worst case scenario happens. For now, pay close attention to the Seahawks. Next year could be a great year where the team finally fixes itself, or the end of a dynasty. 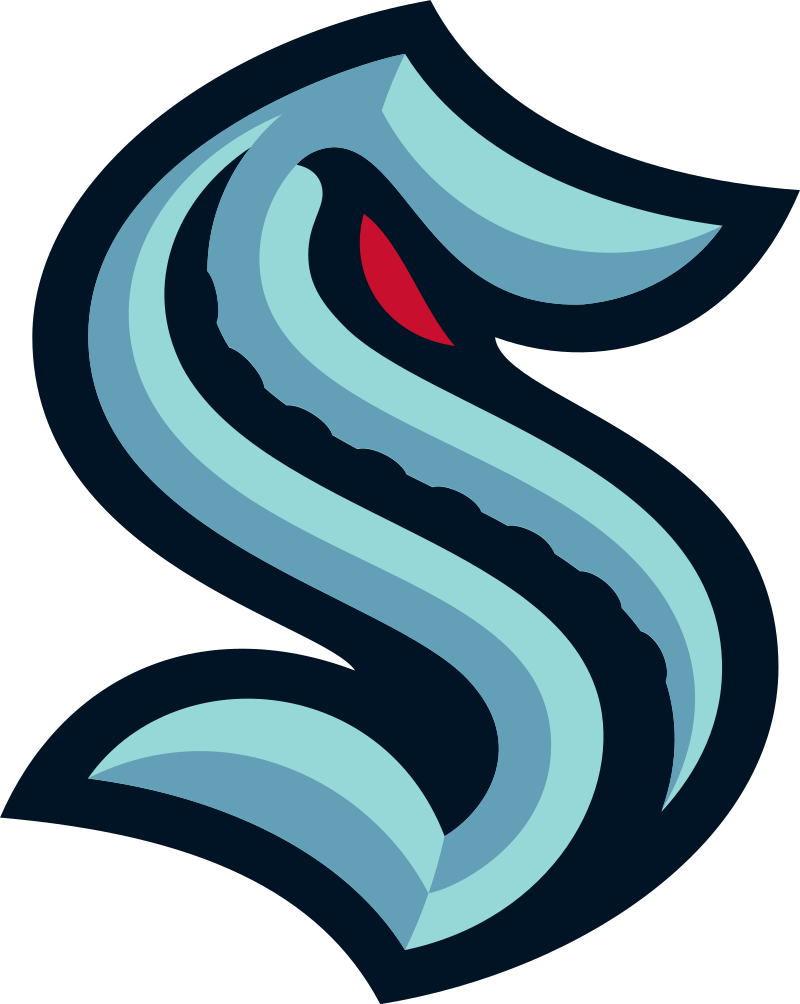 Seattle Kraken logo, unveiled in 2020
The Seattle Kraken has been hyped up for months at this point, and their inaugural season is soon approaching. But will the Kraken be any good in their first few years? The Vegas Golden Knights saw massive success immediately, winning the conference in their first year. However, looking at other expansion teams both in hockey and other leagues shows that expansion teams are usually pretty bad for their first few years. In hockey, the Jets, Predators, and Blue Jackets floundered in their first few seasons, with the Minnesota Wild being an exception to this in their 3rd season, making a run to the Conference Finals before being beaten by the Ducks. In football, the Texans missed the postseason in their first 9 years, and the Browns have made the playoffs twice in 21 years. In baseball the Arizona Diamondbacks were successful right out of the gate, winning a World Series in year 4. The Tampa Bay Rays, on the other hand, were not so good, whiffing on the postseason until their World Series appearance in year 10. And in basketball, the Pelicans found early success, while the Raptors had to wait five years for their first appearance and the Grizzlies eight. So far, we don’t know who will be coaching the Kraken or who will be playing for the Kraken, and we won’t know until late into 2021. They could be great immediately, or be terrible for years depending on what choices they make. But even if they are terrible, be patient. It takes years for most expansion teams to even crack the playoffs, let alone become a contender for a championship. The final Seattle Sonics home game in 2008.
In 2008, the Seattle SuperSonics, a team beloved by its fans, packed its bags and moved to Oklahoma City to become the Thunder. Despite a loyal fanbase and a large market, the Sonics have not returned to the NBA. There was one attempt to bring the Sacramento Kings to Seattle, but it eventually fell through and the Kings remain in Sacramento. It seems that the best way for Seattle to get an NBA team is through league expansion. Seattle is currently the obvious front-runner for an expansion team, with KeyArena’s renovation and the money new expansion teams could bring making a team in Seattle even more enticing for the NBA. Expansion might be a quick way for the NBA to recoup their losses from COVID-19. However, the current commissioner of the NBA has not expressed interest in expansion. The NBA’s TV deal is also not expiring anytime soon, making expansion even less likely in the near-future. The Sonics might return, but it seems like it won’t be anytime soon.