Most people in the world today have at least heard of chess. I trust many of my readers even know the rules of the game. Chess has been around for 1,500 years, and those who love it are located all across the globe. No board game has ever been so popular, so studied and theorized by intellectuals, and so competed internationally. Hundreds of books have been written about it, and it is in continued speculation today. A 2012 demographic from Agon shows that 605 million adults worldwide play chess regularly. Even today, chess is popular. Netflix has released the show “The Queen’s Gambit” about Beth Harmon’s chess career which has broken records in views. With all this in mind, let us dive into our exploration of what chess is!

A Brief History: Chess, in its original form, most likely originated somewhere in India in the 6th century A.D. It was known by the name ‘Chaturanga’, which means ‘four divisions’ – this refers to the four divisions of the military at the time: infantry, cavalry, elephantry, and chariotry. These each resembled what are now our pawns (infantry), knights (cavalry), bishops (elephantry), and rooks (chariotry) (though each piece moved a bit differently than modern chess pieces). Chaturanga was later brought to Persia and it was called ‘Chatrang’, and it became a part of the education of those in power in Persia. It went through the Muslim empire where it took on more complexity, and then to Europe, where, in the late 15th century, it took on its modern form.

The Game: Chess, in essence, is a game of warfare. The goal is to trap an opponent king so that he is without defense or escape. The game is played on an 8×8 board with 32 pieces, each side possessing 16. There are two lines of 8 pawns, and behind them are the bishops, knights, rooks, and the queen and the king. Each piece moves differently. The pawns can move two spaces forward on the first move, but otherwise can only move one space forward, and capture one space forward diagonally. The bishops move along the available diagonal lines, the knights jump over pieces by going two spaces in one direction and in another one perpendicularly, and the rooks in the available straight lines. The queen has the power of the bishop and the rook, and the king is the most valuable piece, even though it can only move one square in any direction. 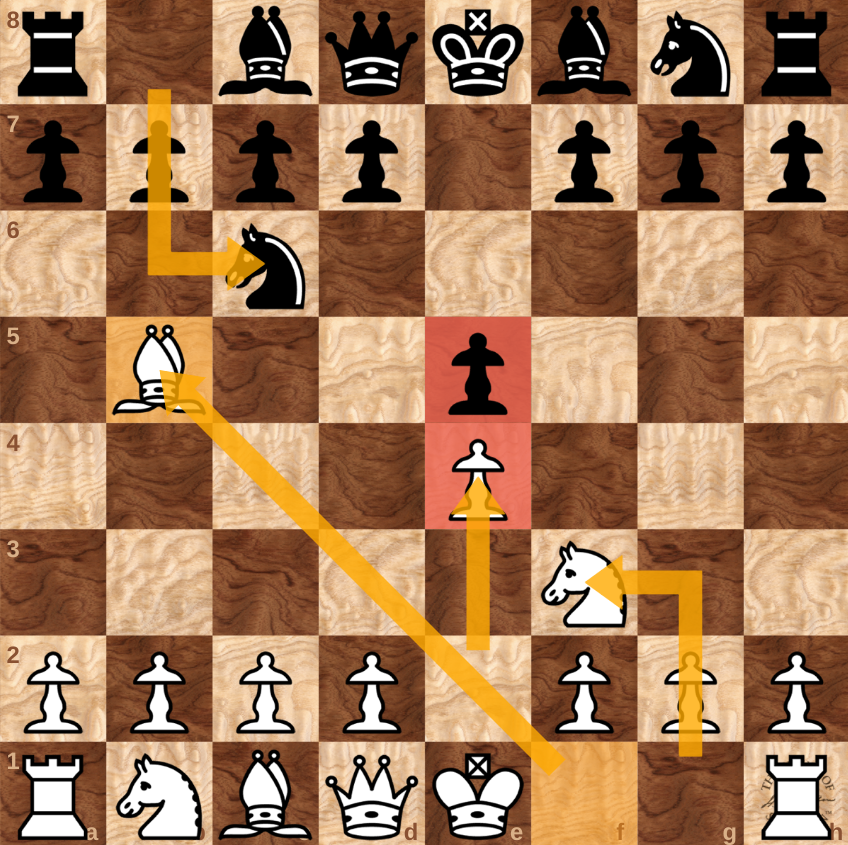 The game has three parts to it: the opening, middlegame, and endgame. The opening is the first moves that are played on the board, defining how the pieces will be positioned and how the whole game will be changed. The two most common first moves are pushing one of the two central pawns two spaces up in the center. From there the pieces may be positioned in many different ways. The image shown is an example of a very common opening called the Ruy Lopez Opening. The middle and endgame is where the real warfare starts. During the middlegame, players attack their opponents with the pieces they have developed to the middle of the board, and defend against their opponents attacks. At the endgame there are only a few pieces left on the board, oftentimes the king, queen or a rook, and pawns. Pawns are the key to winning in an endgame, because if they are pushed all the way down to the opposite side of the board, they can “promote” to a queen, or any other piece.

Another very important part of chess, whether in the opening or the endgame, is tactics. There is a saying that “Chess is 90% tactics”. Tactics are patterns that can be seen in every game that take advantage of a current position on a board. One prominent example of a tactic is the fork, where a piece attacks two of the opponent’s pieces at the same time, forcing a loss of material. The image shown illustrates a pawn attacking both a bishop and a knight. Tactics are everywhere in chess and are vital to gameplay. 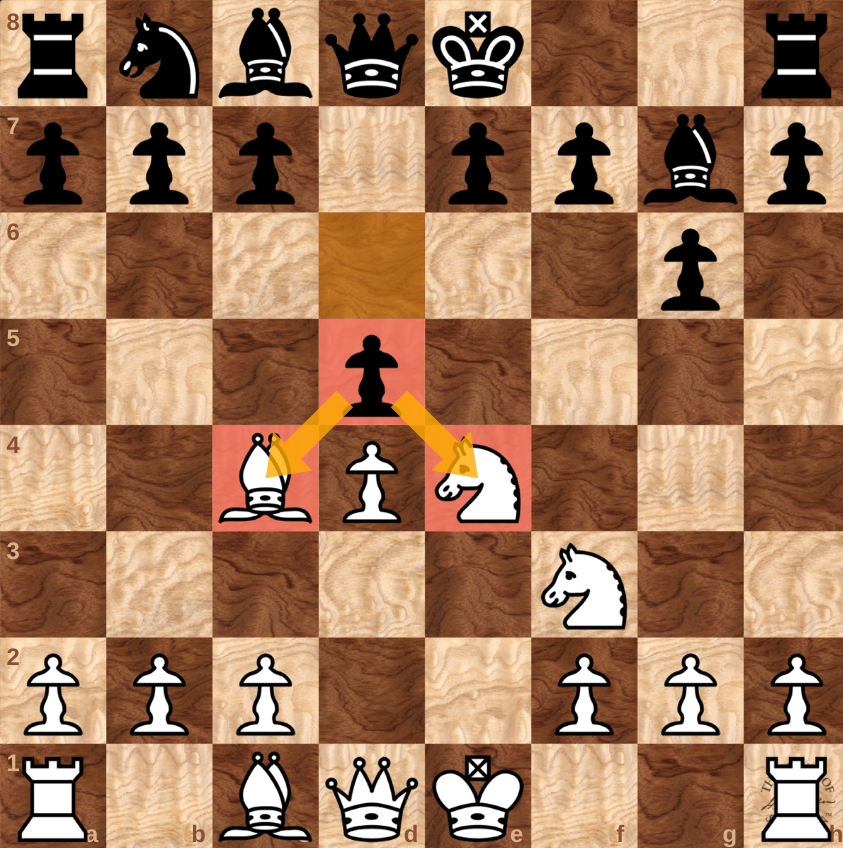 Is Playing Chess Good For You? Chess is a very exciting game in and of itself, but it also has been shown to improve the health of your brain in many different ways. First of all, playing chess involves getting into your opponents minds and plans, and a 2019 study from the NCBI showed that children who play chess grow in the ability to empathize with others and build healthy social relationships. Chess also greatly improves cognitive abilities. Playing chess improves memory, and can even provide protection against the development of dementia. Intelligence and processing skills grow when we play chess also, making it  fun as well as healthy.

Lastly, Chess is everyone’s game. It  is a game for intellectuals and theorists. Chess is a game for the competitive, and it is a game for the casual person who wants to spend time with a friend. It has inspired many people to devote their lives to studying and mastering the game, and it has served as a very beneficial pastime for countless others. Here at AMHS we have a wonderful chess club, and if you are interested in joining, please feel free to contact AMHS Senior Calvin Tomsic at ctomsic@am-hs.org or Mr. Krodel at jkrodel@am-hs.org. I will end with the words of the great chess player Siegbert Tarrasch: “Chess, like love, like music, has the power to make men happy”.